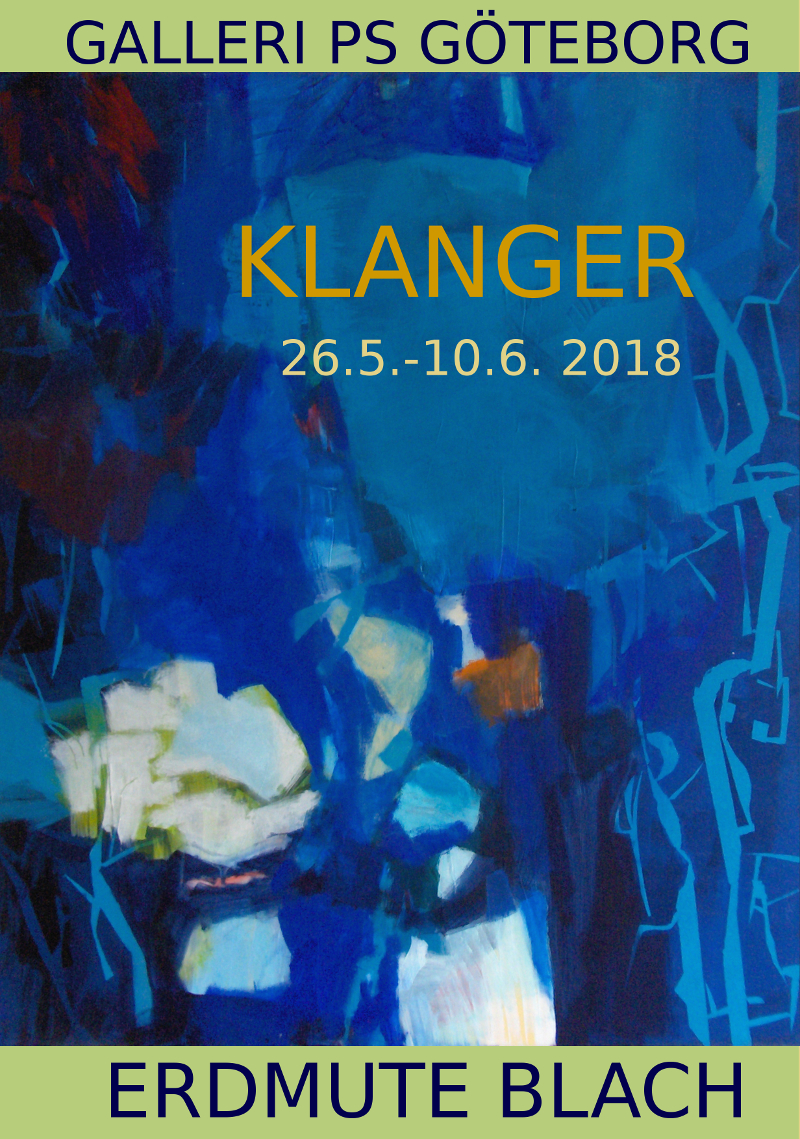 Klanger med månens hastighet
(sounds with the speed of the moon)

The exhibition KLANGER starts with the painting Blue note, a work already finished some years ago, that clearly demonstrates the relation between music and painting for Erdmute Blach:
„The title of the painting has nothing to do with colour by the way, but refers to the phenomenon which interests me most in art too – the shading, the nuances that make both art and life so exciting. Like the blue notes in jazz, subjectively situated between the major and minor keys, which are what actually makes a blues piece blue in the first place. A lot of my pictures are based on ideas about sound, and some are created in connection with specific musical works or styles. What interests me about both painting and music are rhythm, structure, sound quality, harmony and dissonance.
In my opinion it is no coincidence that music played such a major role in the emergence of abstract painting. At the beginning of the last century there were what you might call simultaneous revolutions in both music and the visual arts. Arnold Schoenberg’s 12-tone music saw musicians liberate themselves from established systems, while at the same time, painters gave up certain accepted ideas about space and the notion that their job was to copy reality. Interestingly, the art historian Karin von Maur attributes the astonishing simultaneity of the revolutions in abstraction in cultural centres such as Paris, Moscow, London, Prague and immediately afterwards in America to developments in music, and the fact that music was a kind of guiding light towards which other artists oriented themselves. I believe that the interaction with music continues to play a major role in abstract art.
For a longer period of time I worked to polyphony and jazz, but also find New Music extremely exciting. When I work with ideas about sound or specific genres of music, the styles of painting that result can vary wildly. I worked on series of works based on compositions of Adriana Hölszky (*1953 Bucharest), Amílcar Vasquez Dias (*1945 Badim/ Portugal), Sven Daigger (*1984 Eberbach/Germany) and Jörg Widmann (*1973 Munich). John Cage has provided many important impulses for me. His words “I can’t understand why people are frightened of new ideas. I’m frightened of the old ones” hung for years above my desk, so it’s perhaps not surprising that my first artist’s book, was created to accompany texts by John Cage.
Artist books bring me round to the connection between art and literature, especially poetry, which is another focus of my work. Sometimes we connect with friends all this kinds of art in performances.
Tomas Tranströmer´s wonderful verses have always impressed me deeply with their musicality, their wealth of associations. That´s why in 2013 I created a unique book about his poem Allegro. The work on this book shown in the exhibition began during a stay in Konstepidemin in Göteborg. In 2018 the small group painted on painting boards was created whose title med månens hastighet (with the speed of the moon) refers to a haiku of the poet.“
While the emphasis in the exhibition in Göteborg is on the sound, the parallel exhibition in Rostock deals with the subject of variations.
Galleri PS, Göteborg